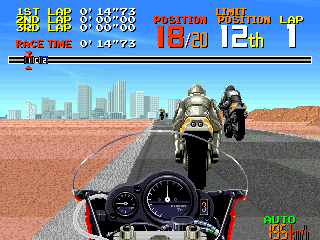 World Grand Prix (ザ・サーキット, "The Circuit") is a 1986 Sega Master System video game. During the course of the game, the player uses a Formula One style car. He or she has to drive the car as quickly as possible while navigating through turns and other vehicles on the road.[4] A formal scoring system is not used; players are not ranked by position unlike most racing games. This kind of timekeeping would not be used in a subsequent video game until the Nintendo Family Computer release of Taito Grand Prix: Eikou heno License the following year. From the 1970s Ferrari pictured in the main menu and the circuits used in the game, the game appears to be loosely based on 1970s Formula One.

The game uses a third-person perspective.

The absence of an authentic Formula One license made it difficult to research the actual Formula One machines of that time; players had to use generic two speed manual transmission machines. While using the regular tracks, the player must either match or beat the target time in order to move to the next level.[4] Otherwise, a game over message will appear without revealing the final score of the game. Getting lower than the target time will score points that will lead to upgrades for his or her vehicle.[4][5] All races are one lap only regardless if the track was custom built or previously designed.[6]

World Grand Prix would be ahead of its time for working around the 8-bit math processor to allow the car to travel in excess of 255 kilometres per hour. This was considered to be a limitation found in the Nintendo Entertainment System video game Formula One: Built to Win that still had to deal with having 255 as the highest possible number (this problem was endemic to Nintendo games but nearly absent in Sega 8-bit games).

The player can either use reasonable facsimiles of Formula One tracks or create a unique track using his or her imagination.[4] Customizing a track also makes it possible to re-enact famous tracks from any series of racing.

However, the player can play on his or her customized track until the console is shut down because there is no battery backup in the game. As one of the first Formula One games for an 8-bit console system, it is possible for the player's car to blow up on the track even at 5.0 kilometres per hour or 3.1 miles per hour.[7] Tracks made with the track editor mode had to contain fewer than 127 parts due to memory restrictions;[6] the straight section that represents the start/finish line doesn't count towards that limitation. All races must start to the right of the "free straight" piece and finish to the end of the "free straight piece.[6] " Loops can be added in infinite amounts as long as the track conforms to the 127-piece limit.[6] Otherwise, the excess pieces will be prevented from being placed on the track.

The player is given an option to race on that track after making it.[6] Completing it will result in being asked to race it again.[6] There is no possibility for a "game over" on a customized track unless the players desires to do so voluntarily.
Pre-made tracks

Although none of the tracks are specifically named, they are clearly supposed to represent Formula One venues. Not only do the layouts reflect the real-life circuits but there is also stereotypical scenery to accompany each venue. Mount Fuji is the landmark at the Japanese track and shares its status with snow (to represent the Swedish track) and Big Ben (to represent the British track). In actuality, most of these landmarks are located nowhere near the actual race track and serves only to provide a stereotyped view of those particular countries.

The choice of circuits is puzzling because many were no longer in use at the time of release in 1986. Indeed, only five of the twelve venues were still in use in 1986 and only two in the layout depicted. In this way the game seems to reflect 1970s Formula One as the circuits were in regular use, all twelve circuits seem to have been used in the 1976 calendar with the layouts shown.